Our mission at Boox is to turn our clients into fans of what we do, and that means delivering an accounting service that is second to none. Feedback enables us to make the right decisions to optimise the Boox experience.

As a direct result of feedback from clients we are changing the way we support our clients.

We are confident that this new way of working will improve communication, ensure consistency and speed up response times – especially during the holiday seasons.

As many of you will know, we are based in Portsmouth in Hampshire. To stay true to our roots, we have named our new accounting teams after famous forts in the local area.

The Boox offices overlook Porchester Castle on one side and are flanked by the forts of Portsdown Hill on the other.
Forts embody strength and protection, so you could say we are the troops defending you and your business from the consequences of bad accounting!

Here’s a potted history of the landmarks behind our team names: 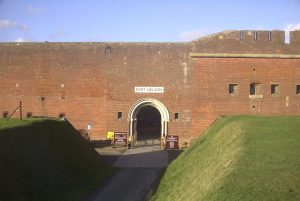 Fort Nelson is one five defensive forts built on the summit of Portsdown Hill (which overlooks Portsmouth Harbour) in the 1860’s
It was built by Royal Commission to prevent a French land attack on Portsmouth dockyard. Having been abandoned in the 1950’s, after years of neglect Fort Nelson was restored to its former glory and opened to the public in 1994. It is now part of the Royal Armories and houses an impressive collection of artillery through the ages. 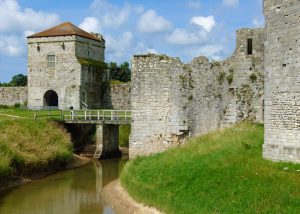 Portchester Castle is a medieval castle built within the walls of a Roman fort built in the third century to defend the South Coast of Roman Britain from Saxon pirates. It holds a commanding position at the north end of Portsmouth harbour. The castle itself is thought to date from the 11th century and was said to be a favourite hunting lodge of King John. Later in its history the castle was used as a prison. It features in Shakespeare’s play “Henry V”, as the location where plotters to overthrow the King were apprehended. 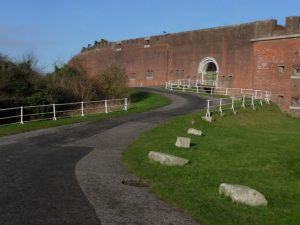 Built in the 1860’s, Fort Purbrook was part of Portsmouth defences against the French. The guns of Fort Purbrook pointed to the North of Portsmouth to protect the city from inland attack.
During both world wars, the fort was used as a barracks. It is now used as an outdoor pursuits centre for young people. These days the fort’s tunnels are used for orienteering, and are said to be haunted! 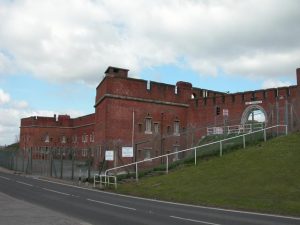 Of the five forts on Portsdown Hill, Fort Southwick is the highest. It holds the water tanks for the other forts on the hill and supplied them via a brick aqueduct. At the start of World War II, Royal Engineers excavated a secret network of tunnels 30 metres beneath Fort Southwick. This was to become the communications nerve centre for “Operation Overlord”, the codename for the Normandy landings.

Fort Widley is another of the Portsdown Hill forts, built between 1860 – 1868 and designed to defend Portsmouth from the north. During the Victorian period, various infantry units were stationed there and it was used as a transit depot during the first world war. An interesting event in Fort Widley’s more recent history was its use in 2010 to host a huge search and rescue exercise based around a simulated earthquake, involving teams from seven countries.

If you are interested, you can find out more about these forts and Portsmouth’s rich heritage at – www.visitportsmouth.co.uk.

As we mentioned earlier, we’ll be emailing all of our existing clients with details of how they can contact their dedicated accounting team. In addition to the dedicated client accounting teams, with their namesakes detailed above, we will have three specialist teams, managing SME clients, Personal tax and Business closures. As a Boox client, you may have contact with one of more of these teams, depending on your accounting needs.

We are really excited for the future of Boox and the introduction of team-based accounting support is just one of the positive changes we are making. These include updates to the Boox App and a great new-look website.

If you have any comments or suggestions to further improve our accounting service, please get in touch.

Written by Lynne Gowers
Disclaimer Although we attempt to ensure that the Information contained in this publication is accurate and up-to-date at the date of publication it may not be comprehensive, we accept no liability for the results of any action taken on the basis of the information they contain and any implied warranties, including but not limited to the implied warranties of satisfactory quality, fitness for a particular purpose, non-infringement and accuracy are excluded to the extent that they may be excluded as a matter of law.

VAT registration – is it better to do it sooner or later?

Once you have your business up and running, one thing you need to consider is the subject of VAT. At first glance, it might seem complicated and time-consuming , especially […]

A growing number of UK drivers are choosing to reduce their carbon footprint by choosing a greener alternative to conventional petrol or diesel vehicles. This trend isn’t just “driven” by […]

Take a look at our recent blogs below.

Employers suspected of failing to meet their workplace pensions duties are being targeted with spot check inspections by the Pensions Regulator (TPR). The majority of employers visited by TPR are […]

Nearly 66,500 taxpayers filed their 2021/22 self assessment return on the first day of the new tax year, according to figures from HMRC. In recent years, there has been an […]

MTD for VAT brings in an extra £195 million in tax

An estimated £195 million extra tax revenue has been collected via Making Tax Digital for VAT (MTD for VAT), according to research from HMRC. The research, conducted by HMRC and […]

The total revenue generated from HMRC’s tax investigations increased to £30.8 billion during 2021, according to research by law firm Pinsent Masons. The figure is up £1.2 billion from 2020 […]

The Statutory Sick Pay Rebate Scheme (SSPRS) will close on 17‌‌‌ ‌March‌‌‌ ‌2022. The SSPRS was reintroduced by the government on 21 December 2021 for employers with fewer than 250 employees. The […]

Almost 100,000 self assessment customers have used online payment plans to spread the cost of their tax bill into monthly instalments since last April, HMRC has said. Since April 2021, […]

The size and complexity of the private sector means that the extension of off-payroll rules, commonly known as IR35, makes compliance a problem for HMRC, the National Audit Office (NAO) […]

Businesses are being encouraged to apply for remaining coronavirus (COVID-19) grant funding from local authorities. Hospitality, leisure and accommodation businesses can still apply for one-off cash grants of up to […]

Around three quarters of UK businesses say they are putting up prices in response to surging costs such as wages, energy and raw materials, according to a new survey. The […]

The government has launched a consultation on the framework for rolling out the 15% global minimum tax on profits which will be payable by the largest multinationals from 2023. The […]

If you need a little help to find the right accountancy service, don’t worry. Get in touch with our friendly team for a FREE service consultation.

Our specialist accounting packages for sole traders and the self-employed combine easy online tools with accountant support to take away the stress of handling your accounts.

Thousands of owner-managed businesses turn to Boox for the right help and advice with running their limited company. They love our personal service and accounting market-leading software.

Pay for what you need

A range of cost-effective accounting services designed for buy-to-let landlords and property investors. Specialist advice and marketing leading software takes the complexity and stress out of managing a property investment business.

Hand over your self-assessment to our experienced personal tax team, who will complete and file your tax return, saving you time and worry.

Discuss your business and accountancy needs in detail with our friendly team with absolutely no obligation.

Request a call back